Yesterday, me (@EntoAqib) and three fellow entomologists (@pseudoliam, @ento_the_wild and @Apis_linzi) began our journey to the Shropshire Entomology Day at the Field Studies Council centre at Preston Montford, bright and early *shudders*. Upon arrival we were greeted with tea and biscuits, alas, we felt alive once more. After signing in and a warm welcome from Sue Townsend (the FSC chair) we saddled up and waited patiently for the talks to begin.

Starting off was Peter Boardman, a dipterist with a particular fondness for craneflies. He gave us an overview of his past year working for Natural England. He began with tales of traversing the country, sampling at stunning SSSI’s (Sites of Special Scientific Interest); accompanied with pictures of beautiful critters. However, it’s not always sunny days spent sweep netting, there’s also an immense amount of post-fieldwork time and effort that goes into sorting, identifying and then recording specimens!

Next up, was Mike Shurmer, a micromoth super-fan and recorder. Turns out micromoths aren’t just boring brown things, they come in a bunch of different colours and patterns. They are the most diverse of UK Lepidoptera, trumping the substantially more popular butterflies and macro-moths, highlighting their importance and need for attention. Some notable records were mentioned, one of which was Crambus ulliginosellus: 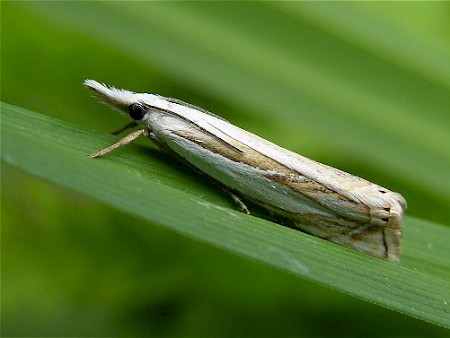 ,this funky looking moth, with an equally funky name, was recorded in Shropshire recently for the first time in 50 years! The presentation ended with a challenge, so I’m going to re-present you guys with the same challenge:

Look out for these two micromoths:- If you do find them (or any other micromoth) remember to submit a record on iRecord!

Third on the agenda was a short presentation by Keiron Brown about BioLinks, a project being ran by the FSC which aims to train individuals of varying expertise in the identification and recording of several invertebrate groups, including relatively overlooked ones. 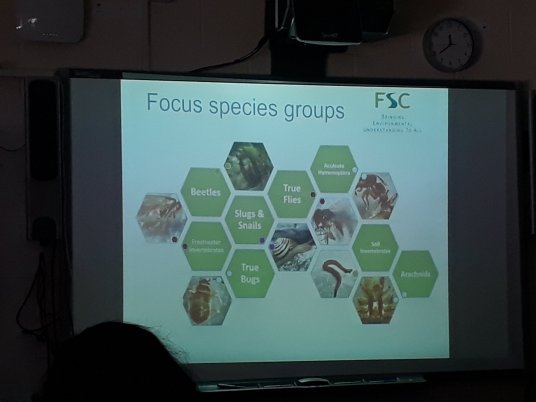 Following suit was a talk by Godfrey Blunt on the problems associated with mapping invertebrates. He began by highlighting the problems with current record mapping. Firstly, just because an organism was once there it doesn’t mean it’s still there now. Current mapping uses the botanists approach, but unlike plants, inverts can move. So, if something was found in a spot away from it’s range it doesn’t mean it’s expanding its natural range, it’s very likely that it’s just a chance recording. Therefore, it is important to note that record maps depict static resident population not mobile ones. He also stated that it shouldn’t just be about simply putting a blob on a map, we should be selective in the data we input (especially with old records), as too many inputs may make a map difficult to interpret. The other side of this problem coin is that not having enough records, which is just as bad. He offered an adequate manner (he stressed that this isn’t a solution) of addressing this problem by adopting the mapping approach used by ornithologists; using different sizes of dots and different shapes depending on the record. This provides a visual source of information which is clearer and substantially easier to interpret. Richard Burkmar gave a demonstration on how to use nifty QGIS to produce a base map with the necessary information and then overlaid the records onto it, followed by a resounding “ooooo” from the audience at the pretty result.

Lawrence Bee followed up with a presentation on what went into the making of the British Spiders Field Guide which he co-authored. It’s a handy dandy book jam-packed with lots of info and tons of gorgeous photographs of spiders. I just couldn’t resist grabbing myself a copy!

An look inside the Britain’s Spiders field guide

My shiny new copy of the guide! Sporting a cute salticid on the front cover

With our stomachs full, we were ready for another round of talks. It was time for a talk which I was really looking forward to- rearing bushcrickets in captivity! Jon Delf talked through several aspects of rearing: starting a culture, suitable housing, feeding requirements, mating and how to treat their eggs. Everything you need to know to rear bushcrickets in the comfort of your own home.

Next up was fellow entomologist and @EntoMasters student, Liam Andrews. His talk was titled: “Pseudoscorpions of Shropshire”. He started off by informing the crowd about this understudied group with an overview. There’s only 27 species in the UK, but about 3500 worldwide (probably substantially more). He then went on to talk about their physiology and behaviour. Pseudoscorpions display phoretic behaviour- they hitch a ride on other organisms such as flies and beetles to disperse. Their physiology is pretty awesome, these little predators are armed with venomous pedipalps (but some don’t have any venom) and chelicerae which they use to subdue their prey. The chelicerae are also tipped with silk producing structures called the galea. The audience was also informed on how to sample for them. A Tullgren funnel can be used, however these aren’t readily accessible, but you can make your own (pic below)! Sieving compost heaps and leaf litter may also expose these elusive critters, as well as scouring under rocks and logs. The informative presentation came to a close with a run through all the species recorded within Shropshire.

Homemade Tullgren funnel, made using a plastic bottle and some gauze, with a desk lamp overhead ©LiamAndrews 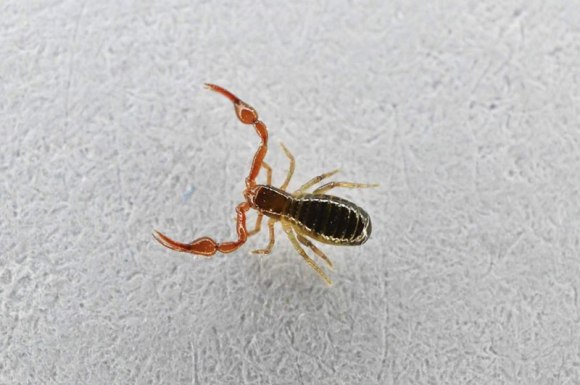 The most common pseudoscorpion in the UK, Neobisium carcinoides. This specimen was actually found by Liam at Preston Montford! ©LiamAndrews

Viv Marsh then delivered a talk on siting and managing artificial bee hotels, with a focus on Osmia bicornis, a stingless bee species which is an effective pollinator. The last presentation of the day was by dipterist Nigel Jones, on the insects which he found sweep netting a single ash tree in his back garden. His finds were very interesting to say the least, including a potentially new species to science! It’s incredible how a single tree can boast such diversity.

Aaaaand that’s a wrap! I’d like to thank the organisers and the speakers for such a fantastic day! Hopefully I can make it next year for another day full of ento-goodness.