The ecological dominance of ants (Hymenoptera: Formicidae) is striking across a very wide spatial scale, reaching its pinnacle in the rainforests and savannahs of the tropics (Hölldobler and Wilson, 1990). The jurisdiction of this Queendom reaches Britain too. Red wood ants (Formica rufa), where found, can constitute a vital part of the local ecology of forests, feeding on aphid honeydew and pretty much any invertebrates they can overpower, like the little myrmidons they are. Jack Weatherington, a fellow MSc student boasting an impressive knowledge of insect taxonomy, has chosen the red wood ant as the focus for his Master’s Research Project (MRP). However, he faced a dilemma!

Though he initially knew he wanted to conduct research on ants, he got speaking to Dr. Max Barclay of the Natural History Museum (@Coleopterist). Dr. Barclay is a God among entomologists studying systematics – a beetle taxonomist and all-round Coleoptera expert, with an improbably well-developed ability to identify beetles at a glance. Jack therefore changed his allegiance to beetles, wanting to focus on them instead. But alas, his love of ants toyed with him still, preventing him from committing to studying one or the other. Musing upon his situation, he realised that he could incorporate his passions for both taxa by studying a very interesting group of beetles – those which live within the red wood ant colony.

Beginning in late April and continuing through to June, he’ll be measuring the effectiveness and suitability of sampling techniques for these types of beetles, and if species richness and abundance differ between them, in old natural conifer forests, new natural conifer forests, and pine plantations in and around the New Forest. One of the methods involves placing a brick with eight holes filled with pine needles or suitable substrate on top of an active ant nest. This brick will be left for a week, and by that time, should have been enveloped by the nest. Upon extracting it, using clever placement of string, the myrmecophilous (literally “ant loving”) beetles should be present in some of the eight holes. The other method involves a total excavation of an ant nest and then sieving of the contents to reveal any myrmecophilous beetles. Samples will then be frozen and identified to species level.

Depending on the number of beetles found, this could turn out to be quite the undertaking, as beetles can be notoriously difficult to identify to species level. However, Jack hopes his intrepid task might point towards how to better sample for myrmecophilous insects in red wood ant nests. He’s drawing primarily from the books The Guests of British Ants (Donisthorpe, 1927) and Wood Ant Ecology and Conservation (Stockan and Robinson, 2016).

Though he’ll be focussing on beetles, the poorly understood Formicoxenus nitidulus (Formicidae: Myrmicinae) may also be uncovered, Jack asserts. This would be interesting, as it rarely appears in Britain (and is currently listed as “vulnerable” by the IUCN). 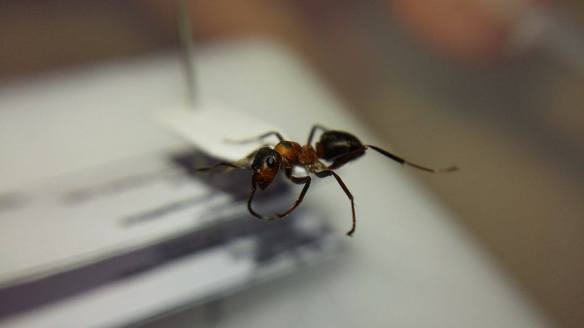