For the majority of insects spiders are formidable predators made of venomous fangs and inevitable death, and are best avoided at all costs. There are a select few insects that have instead managed to turn the table on spiders, by using devious trickery and sheer terrifying brutality. There are the wasps of the family Pompilidae, which include gargantuan species commonly referred to as tarantula hawks that fearlessly attack and subdue (you guessed it) tarantulas. Assassin bugs in the Stenolemus genus (Reduviidae: Emesinae) trick spiders by climbing onto webs and mimicking the vibrations made by trapped insects, only to pounce when the spider gets within range and pierce them with their sharp rostrum to enjoy a liquid meal of spider haemolymph.

However, if spiders can dream, then the insects surely lurking in the shadows of their worst nightmares are the mantidflies. 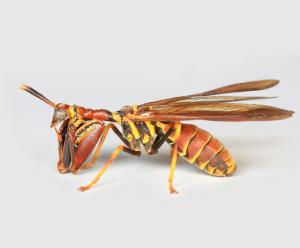 Mantidflies belong to the family Mantispidae (order: Neuroptera), and are arguably one of the strangest looking Chimeras of the insect world, appearing to be glued together from parts of a praying mantis and a lacewing. Some species, such as Climaciella brunnea, take their strange appearance to greater extremes by simultaneously doing an excellent impression of paper wasps (Polistes spp.) in a case of Batesian mimicry. Even more curious than their appearance is the chosen lifestyle of the subfamily Mantispinae. Unsatisfied with being a staple on the menu of spiders, these mantidflies have evolved their own ghastly form of vengeance. During their short 3 to 4 week adult life, females become egg machines, potentially laying thousands in masses on delicate stalks on the underside of leaves to protect them from the elements. When the thousands of campodeiform larvae of C. brunnea hatch they raise themselves up on their rears and wave their legs around in their phoretic posture, all waiting for an unsuspecting spider to pass by like a deranged living carpet of horror. Other species take the proactive approach and actively seek out a hairy eight-legged transportation system. When one appears, they lunge towards it and latch onto the spider’s pedicel or the membranous areas near the carapace, which is known aptly as “spider-boarding.” Some species, for example Mantispa viridis, are “borers” and boycott surfing on spiders entirely. Instead they head straight for already-woven egg sacs, burrowing their way through the silk to the coveted contents inside.

For the little hitchhiking larva though, patience is key. In a display of araneophagy, the larva sustains itself by drinking the “blood” of the spider through its gaping, piercing mouthparts (eat your heart out, vampires!). However, it shows incredible restraint by only taking just enough to survive until it can access its real goal. Even climbing aboard a male doesn’t thwart their devious plan; they just wait until he mates with a female and climb across. Eventually mummy-spider begins lovingly knitting her egg sac with silk from her spinnerets. To her it looks like her future sons and daughters, to the mantidfly it looks like a delightful buffet of sphere-shaped spiderling-smoothies. The larva must race down and hide amongst the spider’s eggs as she lays them without being detected to ensure it gets wrapped up safely inside the silken sac. Time this badly and the larva risks getting woven into the wall of the egg sac and killed. Get detected and the larva risks getting conned into entering an abortive sac of unfertilised eggs and becoming a meal for the spider.

Once safely ensconced inside the silky cradle (whatever their preferred entrance-tactic) the mantidfly larva begins feeding voraciously, engorging itself until it is a grossly rotund and overstretched version of its former campodeiform self. Without the need to cling onto its arachnid vehicle, the larva takes this transformation a step further and moults into its chubby and soft scarabaeiform second instar. This process is called hypermetamorphism and is unique among insects that exhibit phoresy as a parasitic strategy. When the larva’s rapacious appetite is finally satiated, it spins itself a cocoon within the former egg-sac and begins the arduous task of metamorphosis.

Nearly all families of spider have members that fall victim to the retribution of the mantidflies, including some spiders that show great care and dedication to their un-emerged spiderlings, such as the wolf spiders (Lycosa spp.). The spider mums-to-be painstakingly spin and colour the egg sac, spend weeks carrying it around and protecting it from predators, and finally tear apart the egg sac to allow her spiderlings to escape. Imagine then, if you will, the sheer horror of watching your beloved egg sac containing (you believe) your precious children being ripped apart, and a strange alien-creature wrenching itself out from between the tattered ruins of your offsprings’ emptied shells…

Well, they do say that revenge is a “dish best served cold.”