The flight of the bumblebee is not only an excellent classical piece composed by Rimsky-Korsakov, but also the subject of another ‘fact’ about insects, which usually goes something like: “According to the laws of physics, bumblebees shouldn’t be able to fly.” or a phrase of similar meaning. Indeed, the violation of the observably consistent Newtonian Laws of Motion by bumblebees and only bumblebees is not a very strong position to hold and might suggest the advocate of this belief should more fully examine how bumblebees generate lift. I shall try to provide such an examination. But first, let us delve into insect flight more generally!

A bumblebee ‘defying the laws of physics’

There are two main ways insects control their wings. The assumed primitive condition for insects only exists in two living groups, the mayflies (Ephemeroptera) and the dragonflies (Odonata). They are the last surviving members of the group Paelaeoptera (appropriately meaning ‘ancient wing’) and conduct ‘direct flight’. These groups directly control muscles that are attached to the base of each wing, allowing for powerful downward and upward contractions, as well as smaller muscles that can alter the angle or tilt of the wing. The true dragonflies (Odonata: Anisoptera) maximise on this, controlling almost every aspect of their wing strokes, including angle, speed, and power ratio between each wing, whilst wing beat frequency remains largely constant (Alexander, 1986). This method is energetically expensive because of the large muscles involved, but does allow them to out-pace and out-manoeuvre their prey (usually dipterans).

The second method of innervating the wings is found in all other winged insects, the Neopterans (you guessed it, ‘new wing’!), and is called ‘indirect flight’. Although there are muscles attached to the base of the wing, they only control its tilt and angle; the power is generated by muscles that deform the thorax. Contraction of muscles that attach to the top (dorsal) and bottom (ventral) internal surfaces of the thorax – called the tergosternal muscles – pull the thorax down and lever the wings upwards because of the ‘double jointed’ nature of how each wing is attached. The wings are lowered for the downstroke when dorsally located longitudinal muscles compress the thorax front-to-back and the dorsal surface (notum) becomes elevated. The way the wings are moved up and down due to levering effects is comparable to the way rowers pull their oars to generate force. That’s right, just imagine the wings are tiny oars and the notum is the torso of the rower.

In this second group, wing beat frequencies can be substantially higher than in the first. Whilst dragonfly wingbeat frequency may peak at about 40 Hz (beats per second per wing), a hummingbird hawkmoth peaks at 90 Hz, a Bombus terrestris worker bumblebee at 156 Hz, a Chalcid wasp at 400 Hz, and Forcipomyia midges have been shown to peak at 1000 Hz (Sotavalta, 1953; King et al., 1996; Wang, 2005)*. We are referring to beats per second remember! The wingbeat frequencies for the bumblebee, wasp, and midge all exceed the rate at which nerves are able to fire impulses, so their muscles must be adapted to contract several times for each nerve impulse. This type of muscle is called ‘asynchronous flight muscle’.

Our friendly neighbourhood bumblebee has asynchronous flight muscles (i.e. one nerve impulse for several muscle contractions) that are innervated by tergosternal muscles (upstroke) and dorsal longitudinal muscles (downstroke) i.e. it utilises the second method – indirect flight (King et al., 1996). Bumblebees’ wings may be small and heavily loaded, but they are still able to generate significant lift through several cumulative aerodynamic principles. The most important of these is the production of a ‘leading edge vortex’ on each wing (Dickinson et al., 1999).

As the bee’s wing moves through the air (translation), the air flow separates upon crossing the leading edge, but reattaches before reaching the trailing edge. This leaves a sort of air bubble, stimulating the formation of a vortex (a circulating ‘parcel’ of air) that is situated on the dorsal surface of the wing near the leading edge. This vortex generates lift perpendicular to the plane of the wing (‘normal’ force). It sucks in air, accelerating it downwards at high velocity, however, the area it is being sucked into is at low pressure (Bernoulli’s Principle) and it is this low pressure above the wing that provides the lift**.

A physical visualisation of the leading edge vortex, showing the ‘normal’ nature of the force generated (from Sane, 2003)

Not only that, but these vortices detach, persist, and generate further lift by interacting with the wing on the next stroke (Dickinson and Gotz, 1993). The shed vortices enhance the wing velocity and acceleration upon meeting it, resulting in greater aerodynamic forces immediately following stroke reversal – this is called a wing-wake interaction. The reason the airflow separates and a vortex forms is because insect wings are thin and translate at a high angle relative to the oncoming air (angle of attack). This high angle allows a greater downward momentum to be imparted on the air below it, resulting in further lift and thrust generation (Ellington, 1999). Thus, far from defying the laws of physics, bumblebees utilise several complex principles of fluid-dynamics to gloriously propel themselves along in their own bumbling way. 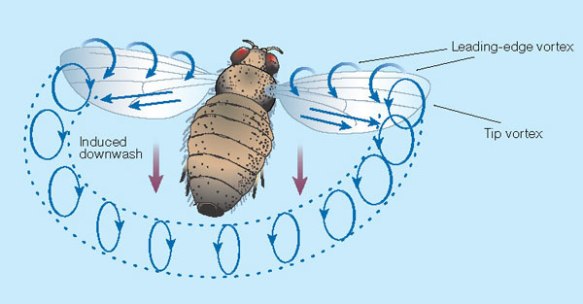 The leading edge vortex and wake creation, which enhances lift when the wing interacts with it on the following stroke in a generic dipteran (from Lauder, 2001).

But how does a bumblebee generate this lift with such small wings relative to their size? A typical B. terrestris bumblebee of 0.88 grams has a total wing area of 1.97 cm2 and therefore a wing loading of 0.447 g cm-2 (0.224 g cm-2 for right and left pairs of wings separately) (Sotavalta, 1952). This figure represents the amount of force the wings need to generate in relation to their area, and bumblebees tend to have a higher wing loading than their mass would suggest (Byrne et al., 1988). The way they generate the required lift with their relatively small wings is by beating them much faster than most other insects of a comparable mass (Byrne et al., 1988). Whilst B. terrestris beats its wings at 156 Hz, the 5% lighter Saturniid moth Adeloneivaia boisduvalii beats it at only 30 Hz (Bartholomew and Casey, 1978). Despite being only 0.04 g lighter at 0.84 g, its wing area is a whopping 5.564 cm2 and therefore its wing loading is kept at a low 0.151 g cm-2. Yet both can fly proficiently. The same is true for numerous other bumblebees (Bombus spp.), as high wing loading seems to be one of their traits as a genus (see Table 1 in Byrne et al., 1986).

The adaptation of indirect flight muscles increases the rate at which bumblebees can flap their wings, which is further augmented by usage of asynchronous flight muscles that remove constraints to wingbeat frequency enforced by the nervous system. The result is a very high wingbeat frequency for their weight, providing them with enough lift, primarily via the leading edge vortex and wing-wake interaction processes. So, according to physical principles, bumblebees are able to fly in a very interesting way.

* These values are rough averages for each taxon

** Interestingly, although the vortex generates lift, it also generates drag due to the normal nature of the force it generates. 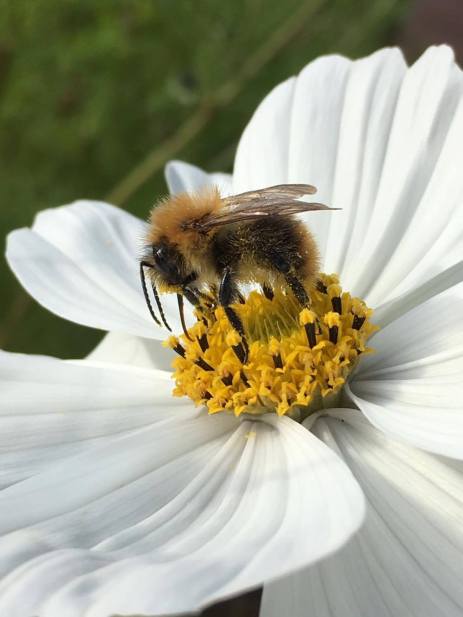 Aerodynamics of fly wing: from Lauder, 2001.

Bartholomew, G. A. and Casey, T. M. (1978). Oxygen consumption of moths during rest, preflight warm-up, and flight in relation to body size and wing morphology. The Journal of Experimental Biology. 76, pp. 11-25.